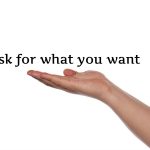 The Law of Attraction [“That which is like unto itself is drawn.”] makes itself pretty clear. However, based on the number of books, audio programs, classes, and blog posts like this one, the conscious use of it gets tricky.
Just like the Law of Gravity and the Speed of Light, the Law of Attraction works all the time whether you’re conscious of it or not. I’ve noticed that when people try to use it consciously, they become like the centipede who tries to figure out which leg comes first!
Over the next few weeks, I’m going to break it down in a series of posts, and the greatest part will focus on Step 3 – Receiving, where most people have the most trouble.

Next time: Tips on how to Ask…