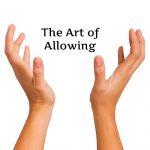 Continuing Series on Law of Attraction and how to make it work.

In the last post, I talked about how the second part of the Law of Attraction works: when you ask for it (step 1), the Universe responds (step 2). Now we’re into the most important step – the Art of Allowing, or, How to Receive What You Asked For.

By definition, when we aren’t in an energy pattern of allowing, we are resisting. The art of allowing is really just becoming open to receiving what we want with a minimum of fuss. Based on what we’ve discussed so far, most people create their own misery and suffering, making things harder because they struggle to make things happen.
The art of allowing is finding the balance between doing and being. Most of us feel like we have to force things to work out or to happen if we want them. We believe our sheer willpower will get us to where we want to go. But there is an ebb and flow in life that we are missing out on when we live in perpetual “doing” mode. We forget about being.

Next post: Law of Attraction – What Allowing is NOT